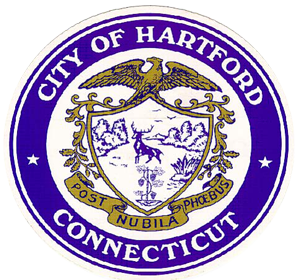 In addition to being Connecticut’s state capital, Hartford was the historic seat of Hartford County until the county government was disbanded in 1960. Known affectionately today as the “Insurance Capital of the World” because of the large number of insurance companies that call Hartford home, the city is actually almost 400 years old making it one of the oldest cities in the United States.

Following a visit from Dutch explorer Adriaen Block in the early 17th century, fur traders set up a trading post at the confluence of the Connecticut and Park Rivers, however abandoned their post by 1654. English settlers arrived in the area in 1635 and named their settlement Newtown only to rename it Hartford two years later, in honor of the English town of Hertford in Hertfordshire where one of the settlers, Samuel Stone had emigrated from. By the time Hartford’s earliest settlers had arrived, the area was already inhabited by a number of Native American tribes, including the Podunks and Pequot Indians.

The leader of this group of settlers in Hartford, Thomas Hooker was a Pastor who had arrived from Massachusetts. It was a sermon Hooker delivered that inspired the writing of the “Fundamental Orders of Connecticut,” a document that went on to inspire the creation of the Connecticut Constitution and ultimately the Constitution of the United States.

During the hot summer months you can trust Aiello Home Services to properly repair or install your air conditioning system to make sure you stay cool. The winter months can be long and cold in Hartford, so you can count on Aiello to make sure your heating system is working. Aiello offers 24/7 heating repair to keep you and your family out of the cold.

Whether it is a plumber you require or perhaps an electrical emergency or just scheduled maintenance, Aiello services Hartford to make sure all your heating, air conditioning, electrical and plumbing issues are resolved successfully in a timely manner.