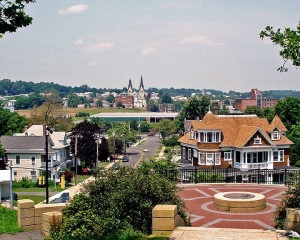 The city of New Britain, Connecticut is located in Hartford County, roughly nine miles southwest of Hartford. The city is affectionately referred to as both the “Hardware City” (based on its history as a manufacturing center and headquarters of Stanley Black & Decker) and as “New Britski” because of its large Polish population.

The area occupied by modern day New Britain was originally settled in 1687 and incorporated as a new parish under the name New Britain Society in 1754. First chartered as a township back in 1850, then as a city in 1871, New Britain consolidated with the nearby town of Berlin in 1905. In the early 20th century, New Britain was known as the “Hardware Capital of the World,” thanks to a number of major hardware companies with headquarters in the city—companies such as The Stanley Works, P&F Corbin Company (later Corbin Locks) and North & Judd.

Frederick Trent Stanley created Stanley’s Bolt Manufactory in New Britain in 1843, where he made door bolts and other wrought-iron hardware. A few years later his cousin, Henry Stanley built The Stanley Rule and Level Company in New Britain, manufacturing planes and levels used by woodworkers throughout the late 19th and early 20th centuries. The two New Britain-based Stanley family owned companies eventually merged with Stanley Rule and Level Company becoming the “Hand Tools Division” inside Stanley Works. Also worth mentioning, both the wire coat hanger, dribbling a basketball and the sport of racquetball—all originated in New Britain.

During the hot summer months you can trust Aiello Home Services to properly repair or install your air conditioning system to make sure you stay cool. The winter months can be long and cold in New Britain, so you can count on Aiello to make sure your heating system is working. Aiello offers 24/7 heating repair to keep you and your family out of the cold.

Whether it is a plumbing or electrical emergency or just scheduled maintenance, Aiello services New Britain to make sure all your heating, air conditioning, electrical and plumbing issues are resolved successfully in a timely manner.