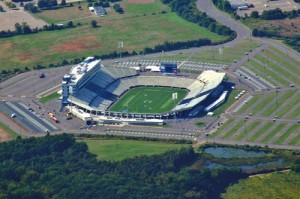 East Hartford, located in Hartford County, Connecticut, was first settled by European who discovered the Connecticut Valley around 1631. The area now known as East Hartford was previously settled by River Tribes, various clans of Native Americans living along the Great River and its many tributaries. In 1659, English settler Thomas Burnham purchased a tract of land from Tantinomo, chief of the Podunk tribe, which today includes the towns of South Windsor and East Hartford.

East Hartford is home to Pratt and Whitney Aircraft, which at one point in the 1940s employed more than 40,000 people building planes for the war effort. Today they manufacture jet engines for the world’s aircraft manufacturers.

A number of noteworthy attractions include Wickham Park and Rentschler Field. Wickham Park, located in East Hartford and Manchester, features Oriental gardens, fountains, open fields, woodlands, ponds, as well as picnic areas, softball fields and an aviary. From the west side of the park, visitors can enjoy a scenic view of East Hartford as well as the distant Hartford skyline across the Connecticut River. Rentschler Field is home to the University of Connecticut Huskies football team, and is used for concerts by a variety of popular artists, including The Rolling Stones.

During the hot summer months you can trust Aiello Home Services to properly repair or install your air conditioning system to make sure you stay cool. The winter months can be long and cold in East Hartford, so you can count on Aiello to make sure your heating system is working. Aiello offers 24/7 heating repair to keep you and your family out of the cold.

Whether it is a plumbing or electrical emergency or just scheduled maintenance, Aiello services East Hartford to make sure all your heating, air conditioning, electrical and plumbing issues are resolved successfully in a timely manner.