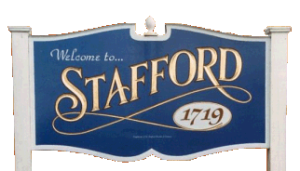 The colonial town of Stafford, CT was originally settled in 1719 before officially becoming a part of Tolland County during its formation in 1785. During that time a majority of the town’s population was concentrated in six or seven different villages. While Stafford’s beginnings are steeped in rural agriculture the town’s close proximity to the Willimantic River tributaries meant easy access to water power, ultimately leading industrialization and subsequently population growth. In the latter part of the 19th century, Stafford became known for its textile mills. In addition, Stafford was known to have produced cannon and shot for the Colonial Army and cannonballs during the Civil War.

By the mid nineteenth century the railroad connected Stafford to markets all over New England. While the State Highway projects of the 1920s and 1930s eventually connected Stafford to other parts of the country, prior to that time there was only a trolley connection to Rockville, CT. Stafford is the third largest town (in terms of land area) in all of Connecticut. While there is a developed downtown business district, Stafford is surrounded by an abundance of greenery including several parks, ponds, lakes, streams as well as farmland. This abundance of nature provides residents and visitors plenty of recreational activities including hunting, fishing, swimming and more. Before Stafford’s incorporation in 1719, mineral springs in the area drew Native Americans and settlers alike. It was said that the water found in these springs had curative properties.

During the hot summer months you can trust Aiello Home Services to properly repair or install your air conditioning system to make sure you stay cool. The winter months can be long and cold in Stafford, so you can count on Aiello to make sure your heating system is working. Aiello offers 24/7 heating repair to keep you and your family out of the cold.

Whether it is a plumber you require or perhaps an electrical emergency or just scheduled maintenance, Aiello services Stafford to make sure all your heating, air conditioning, electrical and plumbing issues are resolved successfully in a timely manner.