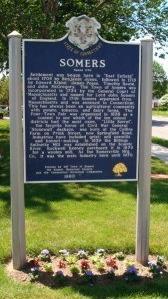 Located in Tolland County, Somers, Connecticut is a town that, in 2007 was named one of the “Best Places to Live” by Money Magazine. The publication based its decision on economic opportunities in town as well as good schools, safe streets, entertainment and an overall sense of community. The town of Somers is located right on the border of Massachusetts and is considered to be a part of the City of Springfield. In fact, Somers is closer to Springfield, MA (9 miles) than it is to Hartford, CT (16 miles).

The area now occupied by Somers was originally settled at the beginning of the 18th century and known as East Enfield. Settled by Benjamin Jones, and later joined by Edward Kibbe, James Pease, Timothy Roote and John McGregory—Somers wasn’t incorporated (and named) until 1734. Named after Lord John Somers of England by the General Court of Massachusetts, the town separated from the State of Massachusetts in 1749, annexed to Connecticut. While the economy of Somers, historically speaking, did include some industry (grist mills, saw mills & bonnet making) it was and still is predominantly known as an agricultural community. Somers was known for its potato, tobacco and dairy farms. The Billings Satinette Mill was built in 1839 along the Scantic River, although it was later purchased by Rockwell Keeney in 1879, turning it into a woolen mill.

During the hot summer months you can trust Aiello Home Services to properly repair or install your air conditioning system to make sure you stay cool. The winter months can be long and cold in Somers, so you can count on Aiello to make sure your heating system is working. Aiello offers 24/7 heating repair to keep you and your family out of the cold.

Whether it is a plumbing or electrical emergency or just scheduled maintenance, Aiello services Somers to make sure all your heating, air conditioning, electrical and plumbing issues are resolved successfully in a timely manner.