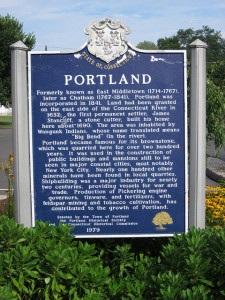 The town of Portland, Connecticut is located in Middlesex County. Prior to the arrival of European settlers in the late 1690s, the area today known as Portland was inhabited by the Wangunk, or “Big Bend” tribe—named for the signature bend in the Connecticut River which curves around a good portion of Portland’s outer perimeter.

Brownstone proved to be a magnetic force for settlers moving into the Portland area in the late 17th century. This brown sandstone was popular, both for use in construction as well as for gravestones. Establishing a settlement near the Connecticut River allowed for the easy transport, not to mention import of the brownstone. The Brownstone quarries in Portland went on to supply the popular rock to major cities all over the country, including New York, Boston, San Francisco—even across the pond in England.

Originally considered part of Middletown, CT and later Chatham (which included present day Portland and East Hampton) Portland became its own entity in 1841, taking its name from Portland, England which is known for freestone quarries. While quarrying ultimately became the town’s go-to industry, the town of Portland has a rich and storied connection with another big industry; shipbuilding. Portland’s Gildersleeve village was named after the Gildersleeves, a prominent family of shipbuilders that lived in the area in the 1800s.

During the hot summer months you can trust Aiello Home Services to properly repair or install your air conditioning system to make sure you stay cool. The winter months can be long and cold in Portland, so you can count on Aiello to make sure your heating system is working. Aiello offers 24/7 heating repair to keep you and your family out of the cold.

Whether it is a plumber you require or perhaps an electrical emergency or just scheduled maintenance, Aiello services Portland to make sure all your heating, air conditioning, electrical and plumbing issues are resolved successfully in a timely manner.