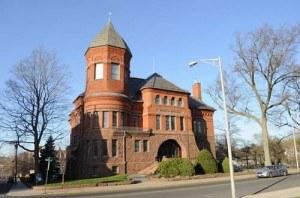 Meriden, Connecticut is a city located in New Haven County. Originally a part of Wallingford, it was given its own, separate meeting house in 1727 and officially became a town in its own right in 1806. Finally, Meriden was incorporated as a city in 1867. Named after a town in England, Meriden was given the nickname, the “Silver City” in the 1800s, after the large number of cutlery and related products that were manufactured in the area by companies like International Silver and Meriden Cutlery.

In addition to cutlery, another company that played a significant economic role in Meriden was the Meriden Machine Company. Founded by Charles Parker and his younger brother, the duo opened their first factory in town in 1832. Manufacturing a variety of products, including steam engines, train wheels, printing presses and more—the company contracted with the Union army during the Civil War to produce both repeating rifles and Springfield rifles.

The city of Meriden was an important railroad hub, starting in the mid-19th century. The railroad line that currently connects Meriden with the cities of New Haven, Hartford and Springfield, Massachusetts was originally considered a part of the New York, New Haven and Hartford Railroad. Meriden was also served by the Middletown, Meriden and Waterbury Railroad which offered both freight and passenger service between Waterbury and Middletown from 1888 to 1924 when it was abandoned.

During the hot summer months you can trust Aiello Home Services to properly repair or install your air conditioning system to make sure you stay cool. The winter months can be long and cold in Meriden, so you can count on Aiello to make sure your heating system is working. Aiello offers 24/7 heating repair to keep you and your family out of the cold.

Whether it is a plumbing or electrical emergency or just scheduled maintenance, Aiello services Meriden to make sure all your heating, air conditioning, electrical and plumbing issues are resolved successfully in a timely manner.